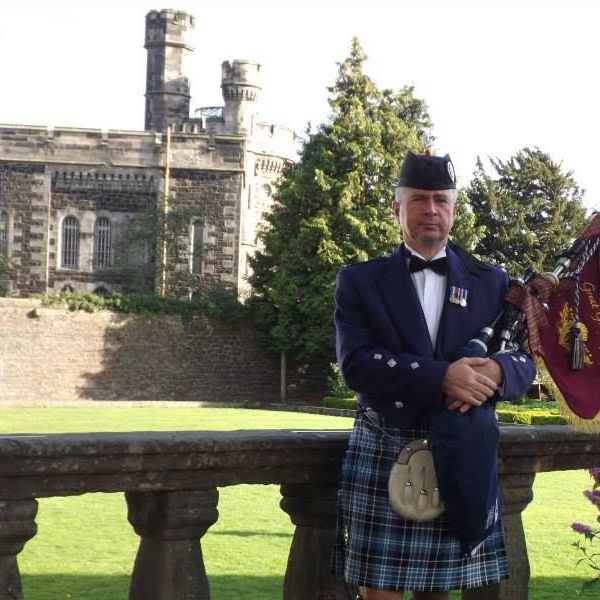 Playing for Royalty at State Banquets may be at the pinnacle of any performer’s career, but for Neil Clark his passion for the bagpipes has taken a modern twist to inspire others to play and soak up Scottish culture.  Having played for the Queen and Princess Diana during his time in the Scots Guards, Neil now takes enormous pleasure in teaching students in live video links, where the taste of the Scottish Highlands can be experienced in homes across the world.

Neil’s vivid memories in the Scots Guards include a time they were asked to Moscow’s Red Square on the 850th Anniversary of Moscow where thousands surrounded them as they stepped off their vehicle.  Neil recalls the time ‘we marched against a mass of people in Red Square and as we played the crowds parted by the driving sound of the Scottish pipes.’

A sound like no other, and much loved by Queen Victoria, the bagpipes continue to be heard by the Queen herself each week day morning by the Piper to the Sovereign.  This daily Royal performance illustrates the historic and cultural importance of the Bagpipes in the UK and Scotland today.

Having completed his role in the Scots Guards Neil now teaches students across three continents in North America, Australia and in native Scotland from his studio in Stirlingshire connecting with them online.  His enthusiasm and attention to detail (and his role as assessor on the Piping and Drumming Qualification Board) has produced many prize-winning students.  ‘Teaching online facilitates a first-hand learning experience of Scottish Pipe Music across global boundaries to those who have a burning desire to learn’ he says.

For Your Space Music Lessons, a specialist online music school, Neil’s bagpipe tuition adds to a range of instruments to learn online, ‘Your Space Music Lessons is where great musicians can pass on their inspiring tales and skills, in personal one-to-one lessons through a screen.  The opportunity is there for everybody’ says Teaching Director Olwen Macleod.

Your Space Music Lessons, that began in the remote Scottish Western Isles,  has the primary objective to match online teachers to those who cannot access tuition in their local area.  It has now built a network of handpicked teachers who have the experience and training to communicate and deliver quality online music lessons.

Bagpipe tuition is available wherever you live from one the Worlds most talented tutors.  Arrange a taster session with Neil Clark here